My fiancé Jon and I have spent the past eight months exploring the US, deciding which outdoorsy small town we want to call home.  When my friends inquire about the curious American subcultures from our travels, one place sticks out in my mind like a giant bovine erection: welcome to Hurricane, Utah…the gateway to Zion National Park.

Pronounced “Hur-a-kin” by the locals—an effort to mimic the accent of early settlers from Liverpool—this Mormon mecca was established as part of Brigham Young’s program to bring agriculture to southern Utah. It remains today one of the more conservative towns in the state, a refuge for Colorado City defects and a polygamy-friendly community.

Jon and I wandered the aisles of Davis Food & Drug at the perimeter of town, observing a group of four women in dull pastel ankle-length dresses who were discussing the menu for their 15 children. Lone men in collared shirts spoke of “bleeding the beast,” code for collecting welfare to make the US government atone for its sins. Two blonde teenage boys in overalls walked into the grocery store and spoke slowly with glazed eyes. I realized that their dreamy remove wasn’t influenced by booze or pot like normal kids their age: they were simply sheltered to the point of dullness. And everyone in Hurricane spoke this way, as if through the fog of an all-consuming ideology.  Yes, the community was impeccably clean, safe, and replete with law-abiding drivers, but something seemed amiss in the uncritical constitution of this population. That was until we met Steve Ward, of course: the swashbuckling, tattooed owner of Barista’s restaurant. 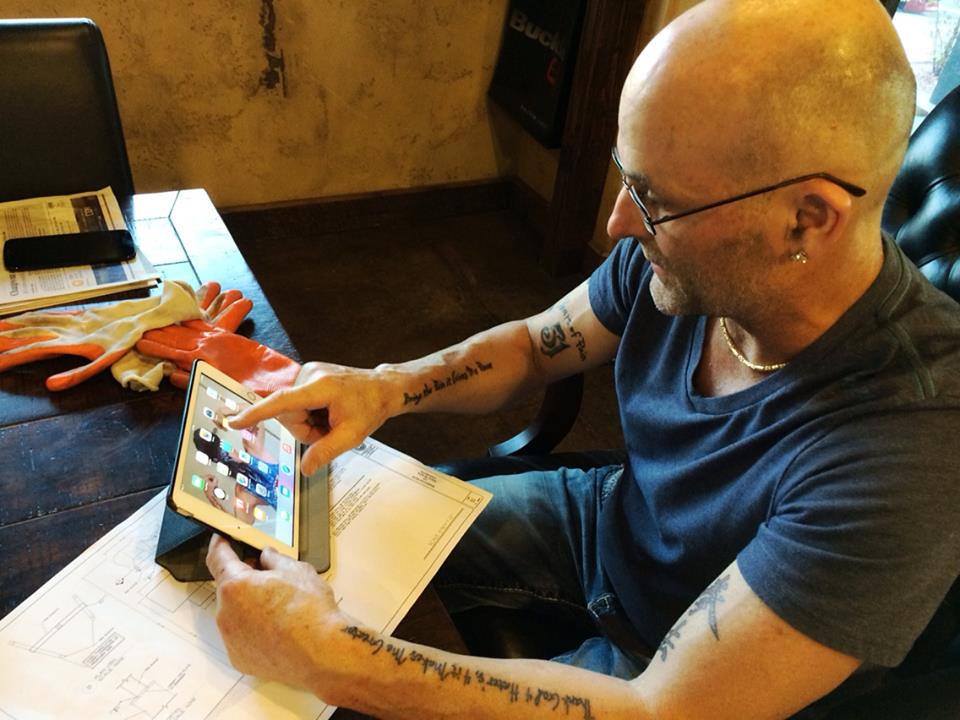 While driving into Hurricane, we hadn’t even realized that we’d passed the most controversial establishment in all of Utah. From the distance of a half-mile, a towering pedestal at the center of town came into sight. As we got closer, we could make out the silhouette of a giant animal. And finally, it became clear. The tallest structure in Hurricane, UT was a marquee with a gargantuan copper sculpture of a bull. And this wasn’t just any bull: this animal donned a magnificent, conical cock with pendulous testicles. Try to imagine this sculpture at the center of a very conservative, very Mormon town. Did I mention that this is across the street from the local high school? 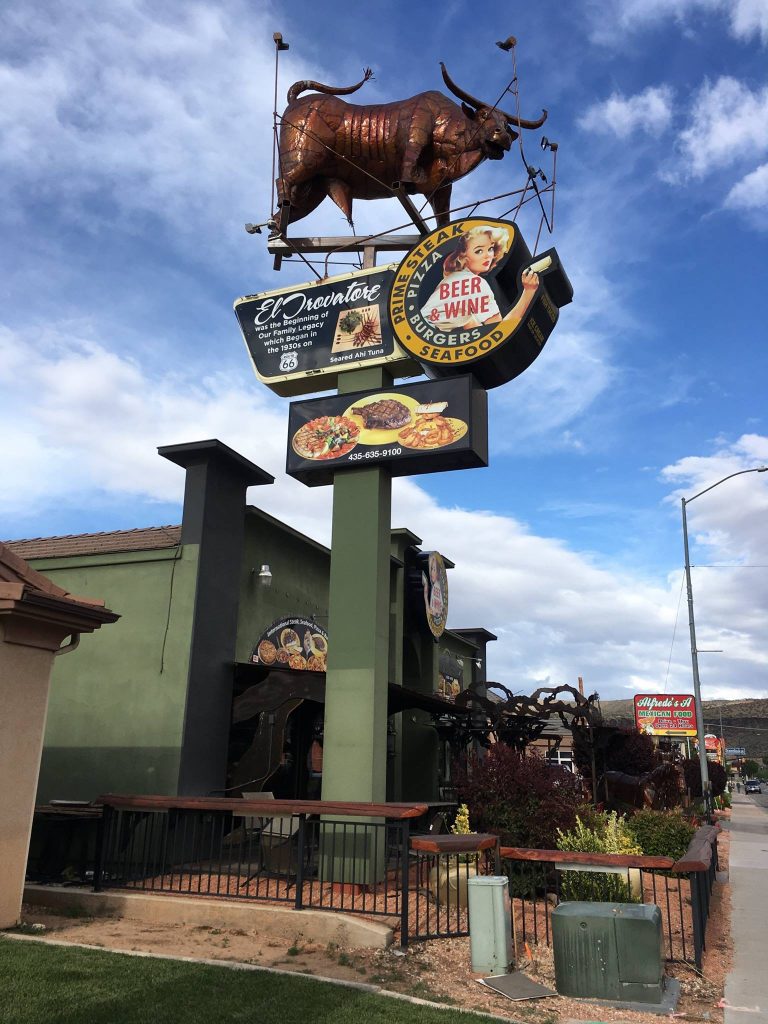 We arrived at our AirBnB, and were immediately warned about Barista’s. Mary—our lovely and piously Mormon host—told us to avoid the place at all costs. While giving us a tour of the sparkling apartment adjoined to her home, I took note of maudlin wall-hangings with phrases like “Once in our home, always our friends.” Her graciousness did not extend to Mr. Ward, however, the town’s most infamous business-owner. She cautioned that not only were Barista’s prices astronomical, but Mr. Ward was a brutish misfit who should be ejected from the community. I decided to investigate the place online, and was delighted to have stumbled upon not only an impassioned local controversy, but also upon some of Yelp’s most entertaining reviews in the country.

I kicked off my research with an article from the Spectrum (March 2015), which reported that the citizens of Hurricane had gathered 600 signatures to shut down Barista’s for “unscrupulous business practices and a hostile attitude toward patrons.” Steve Ward countered that the residents of Hurricane were “haters” and he wasn’t going anywhere. He added that, “The reason [the citizens] don’t like the bull is because they know it’s beautiful and amazing.”

I moved on to Yelp’s greatest hits: 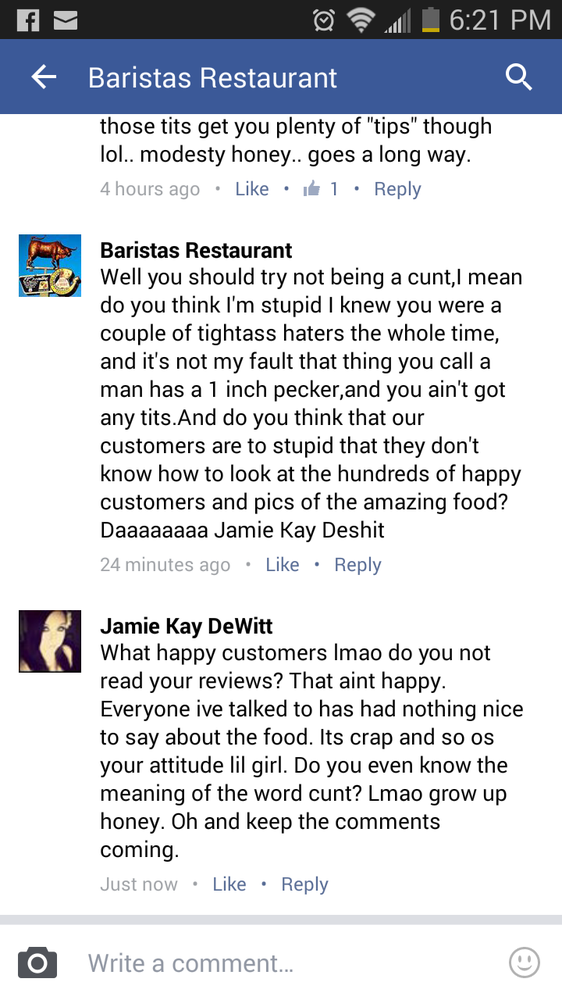 Most curiously, St. George News reported that Barista’s had removed the large member from the copper bull in March of 2015. The young news anchor said solemnly, “The penis has drawn national attention for the controversy stirred over its rather large size.” For the next month, the bull cock was proudly on display atop Barista’s bar counter. My takeaway from that article was Steve’s wife Pam Ward exclaiming, ”We will be here”—and here she banged the table—”until”—bang!—”the day”—bang!—”we die.”

One month later, Death and Taxes (April 2015) declared that the castrated bull had its penis reattached, and Steve Ward proclaimed, “I’ve got people coming from all over the world and they’re like, ‘Where’s the penis?’ I’ve got people coming from North Carolina, I’ve got people from China…I put the dick back up for my customers because they want the dick. My customers like dick.” Even the LA Times (June 2015) got in on the action at this point, and we learned that Ward had spent $130,000 on this irreverent local icon. 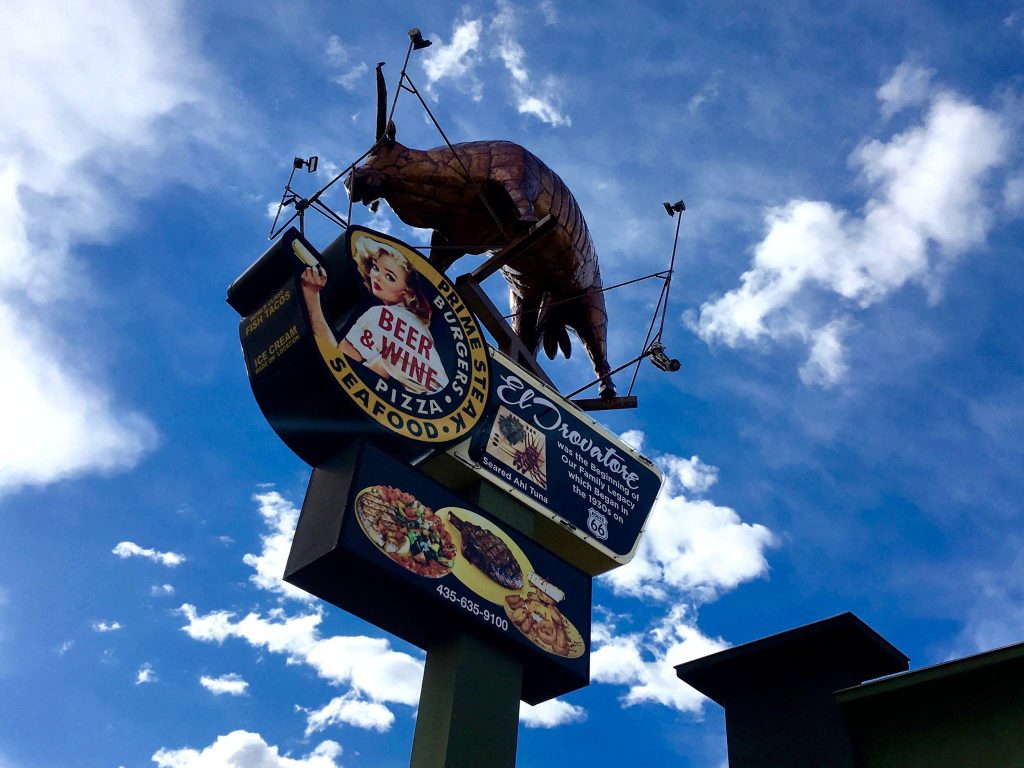 Needless to say, I resolved to meet Steve Ward while we were in town. I arrived at the restaurant, marveling at the bull’s controversial member from every angle, and was met by this family-friendly marketing at the front door: 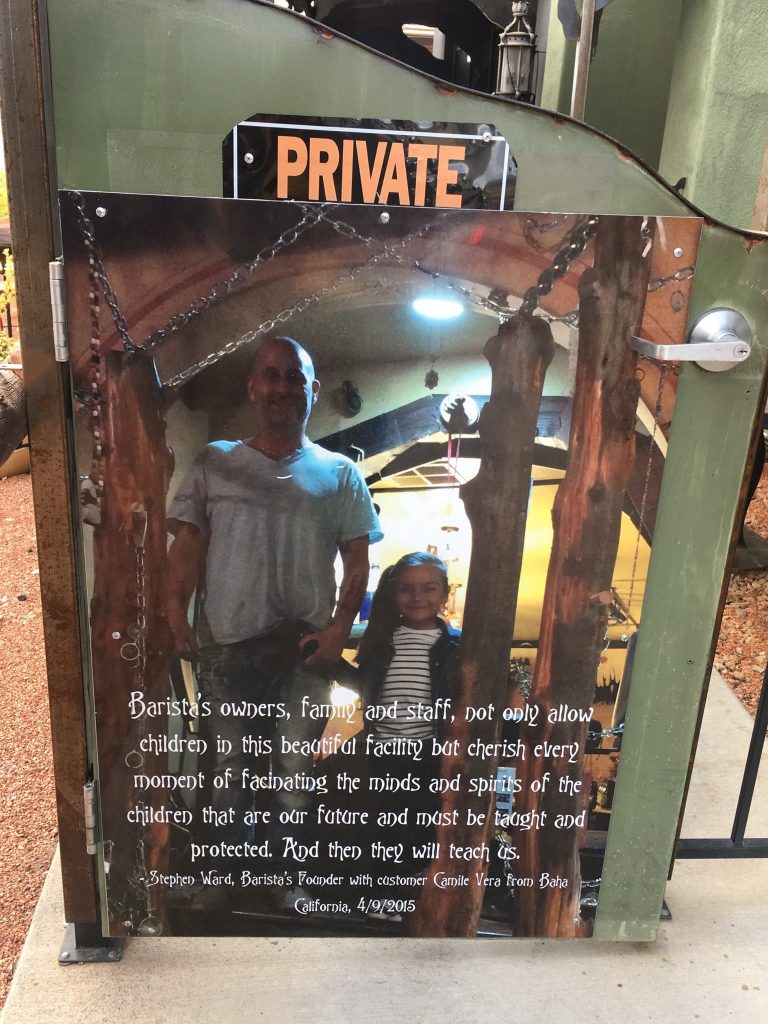 Notice how the picture with young Camile Vera from Baha [sic] California was posted around the same time as the reattachment of Hurricane’s infamous penis in April 2015. I moved to the side of Barista’s and was greeted by a woman in daisy dukes telling me cutely that I must “Enter in rear.” 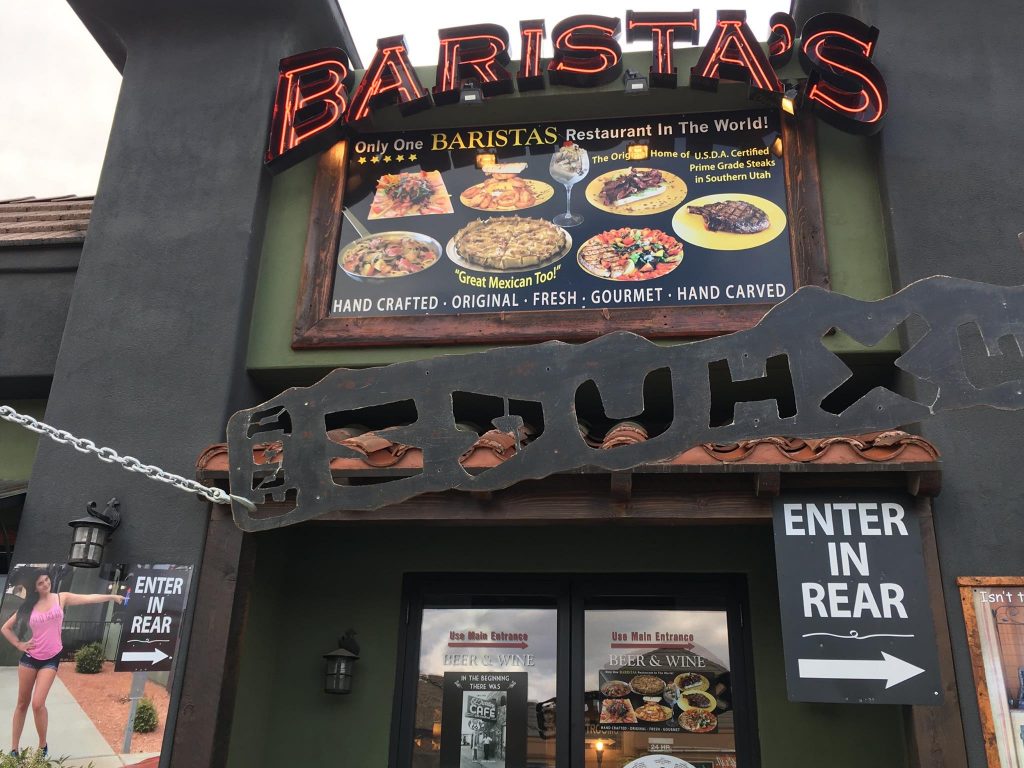 I dutifully entered Barista’s rear, and there he was: Steve Ward in the flesh—the veritable don of national controversy. I only wish I’d gotten a better look at the phrases tattooed across his forearms as he sauntered to my table. After examining the beer list, I asked, “How did you secure a license to serve beers over 4 percent?” 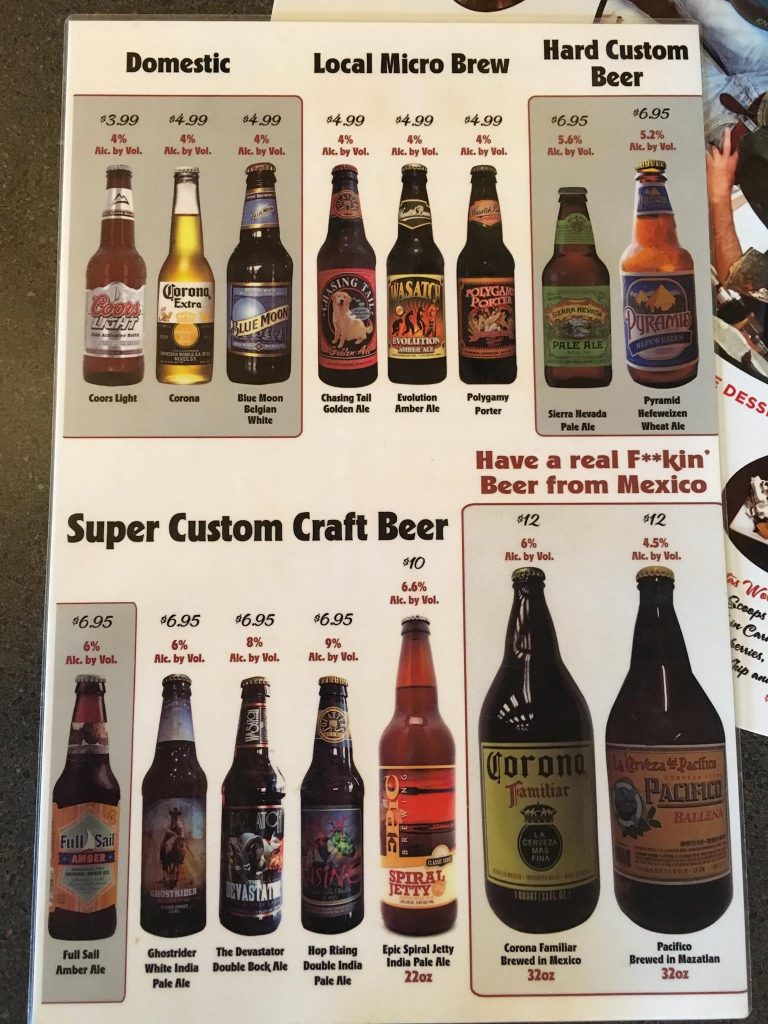 For those of you who haven’t been to Utah, they have some unusual liquor laws to accommodate their Mormon ancestry. First, there’s the “Zion curtain,” the omnipresent bar rule which shields vulnerable patrons’ eyes from the process of pouring alcohol. That’s right: in Utah, if alcohol is served, it must be poured behind a barrier. People can drink booze and even order a “side car” of liquor if they want to make a drink a double, but Utah’s citizens aren’t adult enough to witness bartenders in the act of pouring alcohol. Second, beers from Utah are predominantly 4 percent alcohol and under, even more traditionally heady brews such as IPAs.

It seemed a mystery that Barista’s was serving beers over 4 percent, and so I inquired about the licensure. Without cracking a smile, Mr. Ward leaned in conspiratorially and whispered, “I had to take the town mayor into the alley and rough him up a bit.” Not skipping a beat, I cleared my throat and said softly, “I think I read about that exchange in your Yelp reviews.” Mr. Ward laughed like a stoned schoolgirl and took my drink order. Given Barista’s reputation for serving expensive, subpar food, I’d resolved to make this a drinks-only occasion.

There were three other tables sitting in the restaurant. Steve Ward posted up in a central location, scanning the room. He proceeded to shout at my fellow diners across the room,“Hey! Yeah, you three. Do you need anything…? You good? Ok. Cool…What about you over there? Yeah, you… You cool? All right.”

He returned to my table with a non-apologetic grin and put my first real Utah IPA in front of me. Although it tasted expired, I thanked him politely and asked where he was from originally. He leaned in, his sour breath stinging my eyes, and muttered with a wink, “I’ll tell you later back at my estate…” I abruptly declined the invitation, and Jon came in shortly afterward. Not surprisingly, the dynamic changed once my fiancé was present and Stephen Ward suddenly was all business.

A few weeks after this encounter, I wonder how long Barista’s will endure and whether they’ll be forced again to castrate the copper bull to appease local sensibilities. What Hurricane’s residents didn’t seem to appreciate is that Steve Ward’s transgressions gave that community their bogeyman, a figure against which they could define their own values in opposition. As much as the glassy-eyed blonde teenagers at the grocery store didn’t seem to know life outside of their town, the area was given purpose and meaning in organizing against a local business owner who didn’t fit their mold. More than anything, I wonder what Steve Ward gets out of it. Sure, Hurricane is situated at the base of Zion National Park, and sure, Steve’s family once owned a hotel in town, and sure, Ward claims to be worth $2.8 million as a result of his business (St. George News, “No Filter” April 2015). More than anything, I think Ward gets off on being the local contrarian who is pushing that ossified Mormon community into the realm of 21st century sex and ostentation. Whatever the outcome, he’s leaving an indelible mark on Hurricane, UT and continues to thrive as an antihero. At the very least, he’s ridden his copper bull into my archives of American countercultural history. 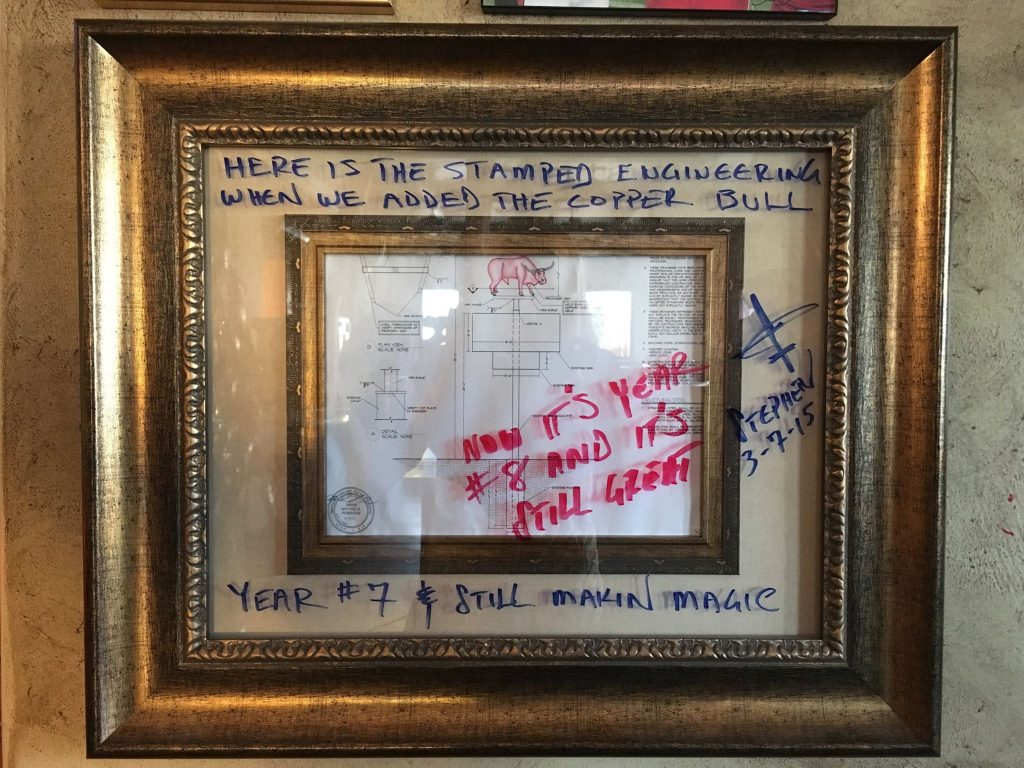