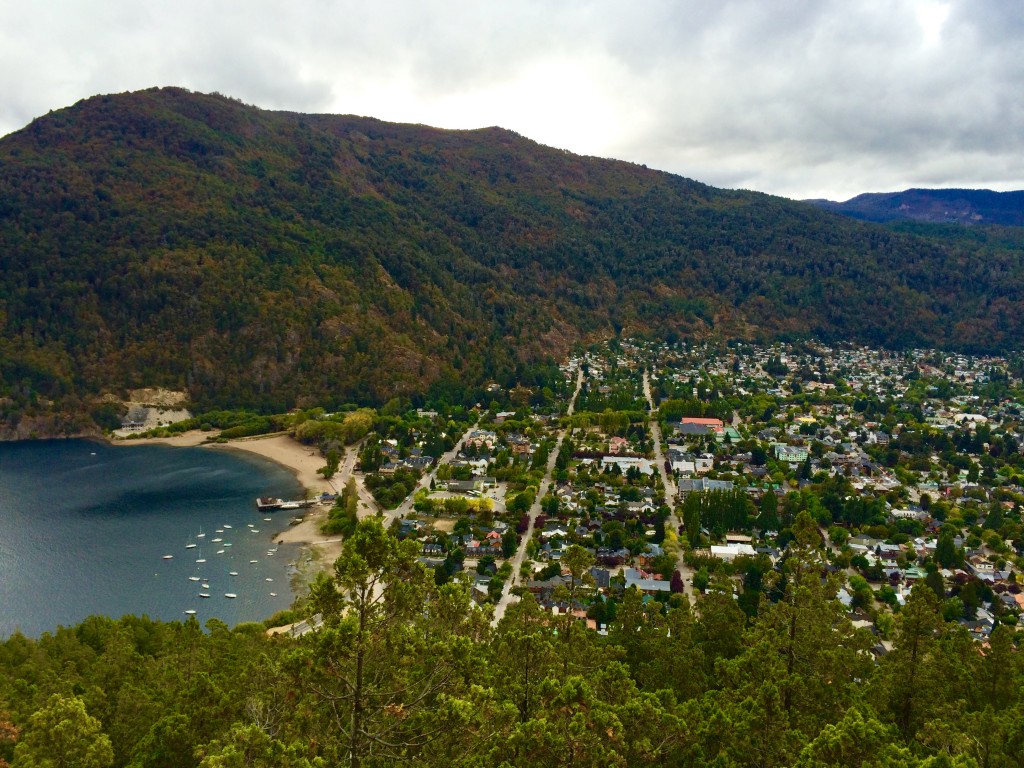 San Martín de Los Andes—a remote village in Patagonia and my home for the past five months—defies description. I’ve puzzled over this opening sentence for the past 10-15 minutes, trying to pin down this place’s character and even in my native language, I’m like a stuttering teenage boy in the presence of divine beauty, afraid of assigning merely secular words to such majesty. And this is from someone who has lived on four continents and traveled throughout the world for the greater part of the last 10 years. There’s no denying I have a healthy basis of comparison, and there’s something ineffably special about this Swiss-style town replete with chocolate shops, cervecerias, and artisan craftworks embraced by an amphitheater of lushly forested mountains along the eastern finger of a beckoning lake. And that’s only the beginning.

San Martín’s most prominent feature, the Lago Lácar, flouts categories of color. Like an iris, the lake sways from raincloud gray to milky turquoise depending on the light and the wind. The town bus terminal is one block away from the beach where men sweat through 5 v 5 soccer, and today, the water is donning her finest military blues. It seems a fitting tribute to José de San Martín—the Argentinian general from whom the village derives its namesake—a demigod who liberated much of South America from the Spanish colonizers in the 19th century. The sun ricochets off the water like stray bullets off a decorative shield, and it’s as hypnotizing as watching fire. Above Lácar rises a forested skyline—a voluptuous woman of trees laying in repose on her side—and even in the dead of this July winter, people fill the lakeside benches to talk, picnic, and sip on hot yerba mate.

It hasn’t all been Malbec and roses, though. I was here during a natural disaster that made international news.  On the evening of April 22nd, 2015, the Calbuco Volcano erupted casting a thick plume of ash over San Martín from over 100 miles away.

At 11:00 am the next morning, it was still pitch-black outside, and it was difficult to breathe. I checked all of our timekeeping devices thinking there must be some kind of glitch in the Matrix. How could the sun still not be up when it was nearing noon? In fact, all of the sun’s rays had been blocked out by an opaque cloud of particulate matter that was steadily blanketing everything in sight. In the words of my boyfriend, “This is some biblical, Armageddon shit!” Indeed it was, and it’s been the only day in my life that I feared the sun would never rise.

The community, however, faced the challenge with aplomb and immediately began clearing ash from the streets. The volcanic substance, also referred to as tephra, is supremely absorbent and becomes so heavy with water that it’s been known to collapse houses. It’s important to clear it quickly, especially from vulnerable rooftops.

All of this was explained to me by the town’s many seasoned volcano professionals. I learned that in 2011, the Puyehue Volcano—this one much closer than Calbuco—erupted and suffocated the area in meters of ash…meters…forcing the closure of the area’s largest airport in Bariloche for over a year, a devastating blow given the area’s heavy dependence on tourism. Can you imagine wading through waist-high volcanic ash? In 2015 however, the sun did rise on April 23rd, and the townspeople filled the streets donning colorful bandanas over their noses and mouths, laughing at how mild this was compared to the last eruption.

Since this was my first brush with a volcano, I had no idea what to expect. Friends on Facebook witnessed the death of technicolor in my photos during those first few days, and lamented that, “All of the birds and animals are going die!!! So sad.”

Well, I didn’t really believe that, actually. This was certainly no 79 A.D. Vesuvius, and although I was worried about the airport being open in time for my best friend to visit the following month, I remembered how other volcanically active regions not only survived eruptions (e.g., Hawaii, Indonesia, Naples), but thrived in their wake. To that point, it’s been nearly two months since Calbuco blew its impressive load, and new plant growth is everywhere, nourished by the fine minerals of the tephra which will continue to cultivate new life for years to come. Nature’s not-so-subtle changing of the scenes, this time with a happy ending.

Speaking of life, did I mention that this area is a bird-watcher’s wet dream? I learned that three biogeographic regions converge here—Andean forests, high mountains, and Patagonian steppes—each with distinct avian species. In fact, S.M. de Los Andes hosts the annual South American Bird Fair in November, the premier event of its kind on the continent. If you’re like me, you can identify maybe a handful of birds including common seagulls, pigeons, and pelicans, but let me tell you: there exist citizenries of strange, feathered creatures I’d never imagined. There are spring grass parrots with fire-engine red bellies which create jubilant flash-mobs of squawking;  there are tall, gray and yellow birds with footlong beaks which irrigate verdant lawns with their worm-prodding; and there are brown sparrows the size of soccer balls which dig through trashcans and shriek when startled. I am no bird-watcher, but even I took notice of the chirping, trilling, twitter of the village’s omnipresent avian choir.

Birds haven’t been the only ones to treat this area as a sanctuary. Before becoming San Martín, this area served as a winter refuge for the Puelches, an indigenous tribe that raised horses on the eastern slopes of the Andes. In 1898, it was taken over in a territorial dispute between Argentina and Chile, and various settlements and agriculture began to sprout along the lakeshore. In 1937, Lanín National Park was created, stymieing development and protecting the natural environment for generations to come. That early preservation of this region in Patagonia is the reason it still feels unadulterated more than a century after its founding.

I have yet to speak to the village’s most impressive feature: its societies. And I use the plural of the word intentionally. Sure, San Martín boasts impossibly friendly human inhabitants, but there are also roving gangs of healthy mutts and cats everywhere. It’s not uncommon to see a pack of five collarless dogs racing euphorically up and down the sandy lakeshore. I contrast this with what I witnessed in Mexico or Nepal, for instance, where ownerless animals were normally sickly, losing fur in patches, depressed, and malnourished. But not in this Patagonian Shangri La for domesticates. Here, the dogs and cats are affectionate, rock vibrant coats, and don’t live in need, even if some of the long-haired dogs have dreadlocks around their hindquarters which bob—rather adorably—as they frolic. The thing is that there’s abundant fresh water at the lake, kind people, and enough organic compost from Argentina’s legendary “asados” (barbecues) to feed them. I’d never lived in a place where salubrious dogs and cats roamed as free citizens.

And finally, the human society. Here’s a recent story which sums up the bonhomie of San Martín for me: a pair of Belgian filmmakers, Paulina and Damien, were here last month collecting footage of grassroots communities. They were on a budget, and decided to stay with our dear friend Daniel whom they’d found through Couchsurfer. Their first night in town, Daniel put together a dinner party and prepared “carne relleno,” a thick, tender steak wrapped around garlic and red peppers, salted and baked in a decadent red wine broth. The dinner party raged past 3:00 in the morning—as many dinner parties do here—and it slipped out that Damien’s 30th birthday was two days later. Wondering how we could make it special for our new friends, we rallied a group of 10 and hosted an epic asado to celebrate. Everyone played instruments and feasted on tender meats, fresh bread, and birthday cake from an awesome local bakery. Now that’s the type of community I want to be a part of: one where strangers can roll into town and have a barbecue thrown in their honor two days later, as if among old friends.

For me, a person who has lived wandering from country to country for years, it’s the first time I’ve really felt at home anywhere since fleeing my mother’s coop. The Argentinians have a phrase that sums up the kindness and warm cheer of the people here: “re buena onda,” or very good vibes. I’m grateful for the buena onda here and I’ll do my best to pay it forward.