We’ve all had it happen to us, Ladies: we’re walking down the street when some portly ape who never graduated from high school commands you, “Smile! Why are you so serious, girl?” This is one of the more common indignities of being female (i.e., the presumption that we must sweetly acknowledge every rando’s call for attention). Here, the overarching expectation is that women should always be cheerful and positive, and it really chaps my lady-hide. The worst part is that women hardly ever get credit for being prosocial, wonderful people. That behavior is simply expected of us.

Slate Magazine and others have shown that a father simply holding a toddler in a supermarket is likely to be praised by onlookers: “Wow! What an amazing father you must be! Look at that, Jim! Golly gee, this man is holding a child!” By comparison, a woman can be managing her four children in the grocery store—she can be juggling cantaloupes and teaching her enthralled mini-crew about the importance of good nutrition in a catchy song-and-dance routine—and she’ll barely be meeting society’s expectations of motherhood. If she drops one cantaloupe or misses one step in her jingle, a chorus of onlooker disapproval will rise: “Jim, do you see that woman with all those children? No wonder she dropped that cantaloupe.” She has failed as a mother and as a woman.

When men act nurturing, compassionate or selfless, they’re heralded as heroes. These are the very same qualities which are ascribed to the female personality and for us, failing to embody those traits is socially unacceptable. We continually walk a razor’s edge of unwavering standards of propriety.  To be good, decent people is not exceptional or praiseworthy—it’s required—and anything less than philanthropic perfection is seen as a deficit.

Furthermore, if women are expected to have a “civilizing influence” over men, why is it that men typically get pegged as the more “rational sex?” This is a contradiction. Society simultaneously expects us to rein in the wild male impulses, but the men who are behaving badly are still assumed to be more analytical and better thinkers. Who’s running the PR on that horseshit? Why would men have the compliment of a reputation for good sense when women are often tasked with cleaning up their messes, literally and metaphorically?

I’ll take that point one step further: women are expected to be the understanding healers for all the male fuck-ups in their lives. Our husbands, sons, brothers, fathers, uncles, grandfathers and male friends are forgiven for any number of sociopathic displays—terrible moods, insensitivity, drunken tirades, piggishness, arrogance, and violence. Boys will be boys, right? Many a man has been forgiven for his hysteria or aggression when someone takes his parking spot. On the other hand, acting hysterically or aggressively got our great-grandmothers institutionalized. Because when women behave immodestly or violently, we’re pegged as insane; when men do it, it’s a mistake. In other words, people will assume antisocial behavior in a woman stems from some internal, unchangeable aspect of her constitution. For men, the same behavior is often seen as externally motivated or influenced by a situation.

This pattern reverses when a behavior is positive or related to competence. In a study titled “He’s Skilled, She’s Lucky,” researchers from Pennsylvania and Washington State Universities found that people are more likely to attribute a solid performance on an exam to a man’s internal characteristic—his competence—and for a woman, an impressive score might be written off as a stroke of good fortune.

These cumulative iniquities actually underscore my main problem: the indignity of domesticity. It’s difficult to feel that becoming a wife and a mother in this country is fair when all of the work that goes into those roles is unpaid and undervalued. I’m not arguing the work isn’t important; I’m arguing that being a mother is not as respected in American society as making money is. The lion’s share of the recognition and credit in the US goes to those who pursue creative, autonomous professions. I find it difficult to imagine sacrificing a majority of my time to activities such as washing clothes, shopping for groceries and changing diapers when these boring, time-consuming tasks aren’t esteemed. And while men today are assuming a larger role in domestic work than in the past, women still do the vast majority of the second shift: the childcare and the house chores. It feels personally devaluing to have to take all of this on with a smile. And this is in addition to the relatively underpaid careers we’re required to have because 1) single-earner families are a thing of the past, and 2) being “only” a housewife and/or mother is frowned upon in the 21st century. 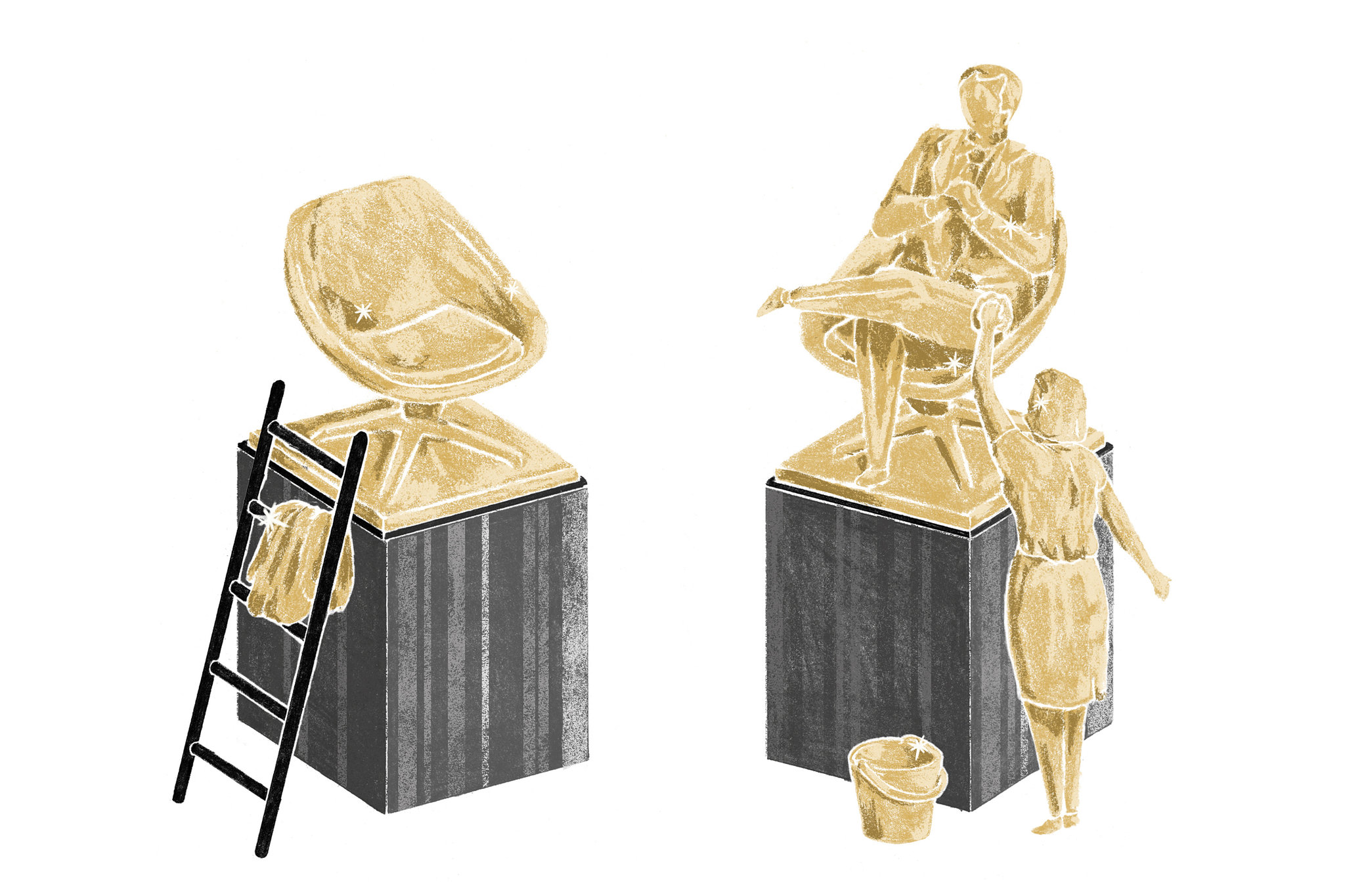 This sexism runs so deep it’s as if women have a polluting influence in the professional world. The NY Times (March 2016) reported that when women enter a career field traditionally dominated by men, the pay drops precipitously. NYU’s Dr. Paula England conducted a comprehensive study on pay across professions which had changed their gender composition between 1950 and 2000. She studied park counselors and ticket clerks—fields historically dominated by men—and found that as women entered these jobs, median hourly wages dropped between 43 and 57 percent. This phenomenon was also observed among designers (34 percent drop) and biologists (18 percent drop), and the reverse was found in computer programming. This is a field which used to be dominated by women and considered menial; as more men became programmers, however, pay and prestige increased substantially.

And the gender disparity doesn’t stop with careers, parenting or housework. It’s built into how our communication is perceived. When women speak with the same knowledge, competence or conviction as men, we’re often seen as shrill, cold, pushy, or aggressive. Sheryl Sandberg hits on it with her discussions of being seen as bossy, but more interesting to me is the Goldberg Paradigm. Studies around the world have yielded the same result: when identical words are uttered by a man and a woman, people consistently evaluate the man more favorably. The same prejudice affects minority groups as well, supporting the old idea that women and non-whites have to several times as good as their white male colleagues to be taken seriously.

We all can admit that a non-white or non-male Donald Trump would have been laughed out of business and politics a long time ago, but there he waddles: basking in the glory of his orange privilege, a torrent of bigoted garbage spewing from his greasy lips. Just try to imagine a woman, a Mexican or an African American getting away with saying, “My IQ is one of the highest—and you all know it! Please don’t feel so stupid or insecure; it’s not your fault.” Arrogance (like many of men’s bad behaviors) is more forgivable when it comes from a rich, white dude. Kind of like raping an unconscious girl or killing four people while driving drunk. Wealthy assholes including Brock Turner and Ethan Couch receive light sentences when they’d be locked away for life if their skin were brown. Affluenza—a diagnosis which conveniently distances the perpetrator of rape or murder from his responsibility—is an exclusively white male privilege.

Of course, there are things that women get away with which men can’t. For instance, I am at liberty to act ignorant or childlike whenever I want! Playing dumb or downplaying one’s real abilities is rarely acceptable behavior among men, but in women, these displays may even be considered attractive. So there’s that!!!

But there is one important physiological arena where women hold a significant advantage: sexual pleasure. As far too many unsatisfied women have learned, men’s capacity for orgasm is finite and they must rest their lumbering, hairy bodies after blowing their loads. Women don’t have this issue. As I heard it put poignantly during the Vagina Monologues: “Who needs a [man’s] handgun when you’ve got a [woman’s] semi-automatic?”

Women’s infinite capacity for sexual pleasure has always frightened men. With the exception of a few matrilineal and goddess-worshipping cultures, male-dominated religions and societies have mandated virginity in women throughout history. Christianity, Judaism, and Islam all praise women’s chastity and severely condemn the mere mention of women’s sexuality. And in dealing with the uncomfortable reality of how people are made, all of these faiths preach fairytales about immaculate conception and present them as fact. The truth is that Mary fucked Joseph. Buddha’s parents, Krishna’s parents, Mohammad’s parents…they all fucked. In sum, all of the mothers of people who have existed before the development of in vitro fertilization have fucked someone. In an amusing twist of irony, it has only been with the developments of science—not religion—that immaculate conception has actually become possible. And I digress…

So, to summarize the benefits accorded to each sex in 2016:

The good news is that all aspects of white male privilege are socially constructed and totally reversible! There will come a day—Friday, January 20, 2017, to be exact—when we’ll have a female president, the latest blow against white male supremacy. Sixty years ago, the Supreme Court Justice Ruth Bader Ginsburg had to get her husband’s permission and signature to apply for a credit card. Now that’s a huge stride.

And Ladies: unlike the unraveling of the patriarchy, our greater capacity for orgasm is innate and will always be with us! Now if we could only get American sex ed classes to stop treating girls as naive damsels—targets of the “dangerous” male libido—rather than as people with their own pleasure to be had. Sigh. Lady steps, lady steps…