On November 15th, one week after Hillary gave her concession speech to the Flaming Ball of Id, I bought a plane ticket to attend the Million Women March in Washington DC. Sure, the presidential election served as a catalyst, but I had no idea that I’d be participating in the largest multinational protest in world history.

Let me qualify that: the media reported that the Women’s March might have been the largest US protest in history, but according to Wikipedia’s compendium of peaceful gatherings, it actually proved the largest multinational day of protest ever recorded. The better-attended events were typically funerals (e.g.,  Ayatollah, Khomeini, CN Annadurai), single-nation gatherings (e.g., the “Democracy and Martyrs’ Rally” in Istanbul, 2016), or celebrations in Southeast Asia welcoming the Pope, not to mention the incredible 5 million-person turnout for the Chicago Cubs World Series Parade. Therefore, the 4.7+ million people who marched across seven continents on January 21, 2017 produced the LARGEST MULTINATIONAL PROTEST IN WORLD HISTORY. I think that’s pretty damn exciting. 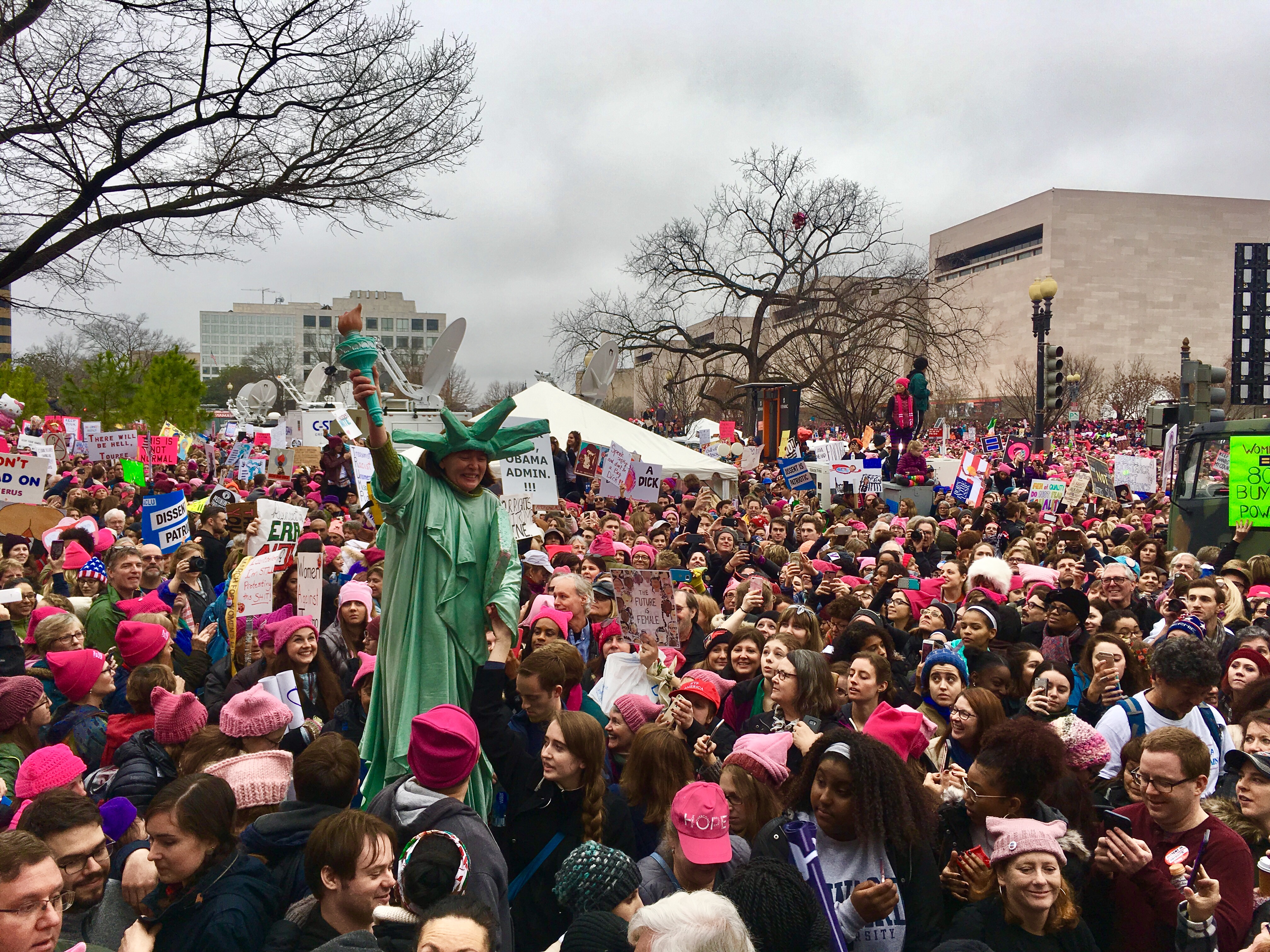 I was lucky enough to get a spot on top of a journalist’s black van at Independence and 4th Street in DC , one block away from the main stage while more than a half a million people stood in the vicinity. My partner and I were even featured in the NY Times.

We heard speeches from Dr. Angela Davis, Gloria Steinem, Kamala Harris, Ashley Judd, Madonna, Michael Moore, Scarlett Johansson, and Alicia Keys, among many others. I met an Iranian-American doctor who had attended the Civil Rights March on Washington as a child in 1963, and she mentioned that the Women’s March that day was still the most impressive show of activism she’d seen in her 50+ years living in DC. Above all, I learned that I wasn’t alone in my sense that all wasn’t right with the world in its treatment of women.

To be clear, people across the globe participated in the Women’s March for varying reasons; it wasn’t simply a display of people’s disgust with Trump, although I understand that sentiment; I can’t convey the indignity of having my own country’s president-elect brag about sexual assault. Not talk, but fucking BRAG about sexual assault. Some people don’t understand what it feels like when your eye contact with a man is treated as a sexual invitation, when you’re physically smaller than those who try to take advantage of you, and when all of it is no fault of your own. For me, the Women’s March helped remedy a longstanding ache in my gut that told me things would be easier for me if I’d been born a man. Here’s how I figure:

Women have only very recently earned legal rights and professional privileges I now take for granted. Women couldn’t serve on juries until 1973, get credit cards in their name until 1974, keep their jobs while pregnant until 1987, or legally refuse to have sex with their spouses until 1993. These restrictions continue to have sociopolitical consequences for women’s progress far beyond the scope of this piece. Just as the impact of slavery didn’t end with the 13th Amendment, we all know that that the legacy of injustice ripples outward affecting future generations long after a law has changed.

The Goldberg Paradigm holds that the exact same words coming out of a man’s mouth are perceived much differently coming from a woman. I’ve been frustrated throughout my life by this truism. A man’s assertiveness is my display of aggression; a man’s intelligence is my smugness; a man’s professional success is my anti-children stance; a man’s forgivable anger is my embarrassing emotional outburst; a man’s heroic, kind act is my default behavior as the “fairer sex.” And don’t get me started on my jokes which have fallen flat only to be repeated and adored when my ex-boyfriends cribbed my words and timing.

I should mention that I was raised by a badass, feminist, single mom. I can’t imagine a more fertile ground for this consciousness that helps me see the invaluable, under-appreciated role women play in society. Women have done more unpaid and unrecognized labor than any group in human history and in changing this disparity, there are excruciating growing pains. For every woman who’s grabbed by man with power, for every successful scientist who suffers sexism from her peers, and for all the moments in between: RESIST.

As for the carrot-hued catalyst of the Women’s March: all rational people see that the Trumpass is pointed in the wrong direction. In his first week in office, he’s implemented a racist ban on refugees and immigrants; pushed forward with the expensive and unnecessary Mexican Border Wall; and established fascist gag orders on several government agencies (e.g., EPA/NIH/NPS), to name the top three things that piss me off. (For the record, the “Mexico City Policy” withholding funding for women’s health organizations internationally is a ball that’s been volleyed between conservative and liberal administrations for the past 30 years. It’s nothing new.)

RESIST not only for women or blacks or Mexicans or immigrants or Muslims, but resist because it’s the right thing to do. We’re only as good as we let all people be, and an arrogant tyrant who cares for nobody but himself, his family, and small circle of wealthy cabinet appointees doesn’t have our best interests in mind.

RESIST by calling your senators and house representatives; RESIST by donating to Planned Parenthood; RESIST by correcting media-reporting errors through social media commentary; RESIST by shifting your money to a credit union away from the banks which stand to profit from the Goldman Sachs agenda; RESIST by enjoying peaceful protests and creating art; RESIST by teaching your daughters and sons that this administration is not normal and does not work in the interests of the American people.

One Reply to “Girls Just Want to Have FUNdamental Rights”