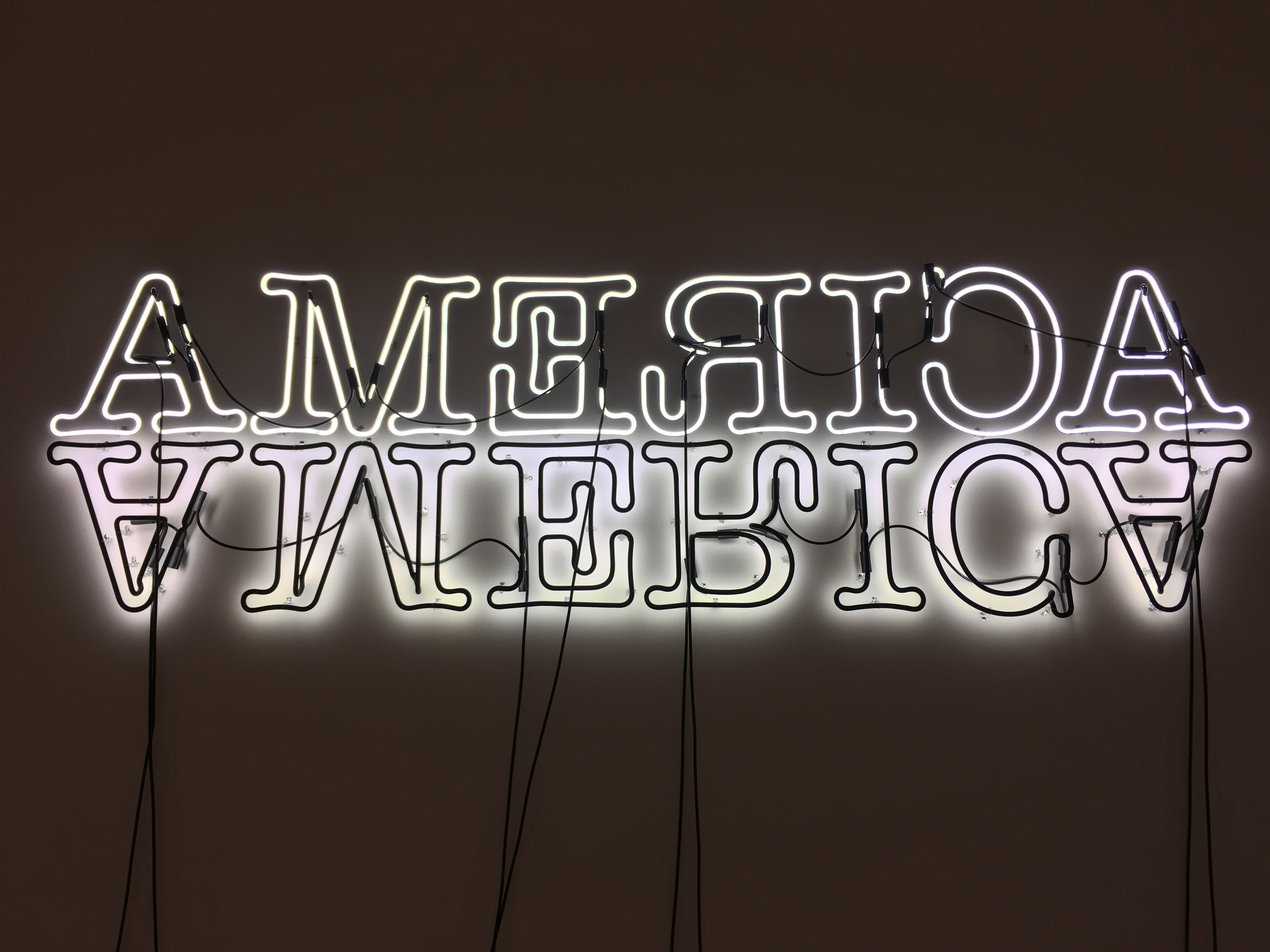 Glenn Ligon (2014); University of Oregon exhibit on artists responding to “Between the World and Me” by Ta-Nehisi Coates

[Note: I like this title, but I can’t promise that you’ll learn anything about the most famous Chinese military strategist in history. In fact, I just peppered my piece with two of his quotes because I believe that “The Art of War” guides more of our government’s policies than the Bible. Thank you for reading this far.]

Like most Americans, I’m afflicted by economic anxiety. For some, it stems from student debt, which is at an all-time high in this country. But for me, it’s worrying about the unforeseen, as if I’m walking a tightrope without a safety net. I may be bankrupted in a moment by a burst appendix or a root canal, despite the fact that I have both health and dental insurance. This gnawing unease prevents Americans from being productive, happy citizens whether we have coverage or not. And I’m one of the lucky ones: I have zero debt and zero dependents. I should feel financially secure but I have diminishing faith that the American government will safeguard healthcare, education, and the environment into our future.

“All warfare is based on deception.”

Sun Tzu, The Art of War

Social security—a program I’ve paid into for all of my working life—might not exist when I retire and need it most. Aetna® and Dental Health Services® will take my money, yet they give me no reassurance that services won’t be massively upended when I need care in the future. At 32, I gladly pay my premiums to support those less fortunate but I question why our wealthy country won’t embrace a single payer system or a better subsidized public option. In 2015, my fiancé got into a serious bike accident in Buenos Aires. He rode an ambulance to the hospital and got stitches, services which would have cost him more than $3,000 in the US without insurance; in Argentina, it was all free.

This incident shows that we need to rethink who deserves the power in our American democracy. We’re supposed to have the power. The people. As it stands, there’s often disagreement between what’s best for the public and what’s best for companies. By illustration, if the profit incentive outweighs the costs:

The worst part is that the people who would benefit most from progressive ideas are those who voted for Trump. Red states typically take more federal money than they pay in, meaning that they’re subsidized by the “liberal elites” that they hate. I also believe that red states suffer precisely because their local governments have elevated corporate welfare over the public interest. For example, a Louisiana town recently found out that they have the highest cancer rate in the country due to pollution from the local DuPont neoprene factory. Ironically the Louisiana town is called St. John the Baptist Parish, which reminds me of my favorite line in The Usual Suspects: “The greatest trick the Devil ever pulled was convincing the world he didn’t exist.” To the citizens of economically depressed areas in the South and Rust Belt: your Devil does exist, and it’s sure as hell not Planned Parenthood, Obamacare, or the EPA. The real Devil is slippery and here’s his secret: he has convinced people that what’s good for Wealth is good for everyone.

I argue that despite what we’ve been told, economic growth is not a real gauge of our progress. I’d always been taught that the best indicator of our country’s success was the growth of our economy. This is usually expressed as an inflation-adjusted percentage of our GDP. Many people don’t question the assumption that we should be striving for ever-higher economic growth—more businesses, more money changing hands, and more investments equals more sweet, greasy American progress. Presidents from both political parties focus squarely on GDP percentages to guide rhetoric, diplomacy, and policy. Like many Americans, I assumed that this figure somehow represented our national well-being, but this overlooks the most important consideration: what’s actually good for people?

We should be using our wealth to help the public meet its potential through investments in healthcare, education, infrastructure, and the environment. Instead, we enrich defense contractors and we’re in perpetual war because it’s good for business.

These days, Fox News and Breitbart incite just enough fear and xenophobia to make some Americans play along. The problem is that rather that doing what’s best for the people, the US is beholden to the interests of powerful corporations which control our government’s policies while channeling wealth into prisons or the military—already larger than the next eight nations combined.

“There is no instance of a country having benefited from prolonged warfare.”

Sun Tzu, The Art of War

How do we fix this? I offer simple solutions:

I don’t have all the answers, but I do know that like many Americans, I’m continually on edge. I’m anxious for myself, my loved ones, and the future of our country’s children. Let’s stop scuffling over abortion, Planned Parenthood, and prayer in schools. Those are divide-and-conquer smokescreen issues which obscure the real problems facing us: healthcare, education, infrastructure, and protecting the environment.